Artistic Director Emma-Jane Morbey and Dance Artist/Scriptwriter Isaac Ouro-Gnao talk about the makings of Father Figurine and its journey to date.

What inspired Father Figurine? Why make a piece of theatre focusing on male mental health?

Emma-Jane: I’m very passionate about mental health awareness, especially around young people from my previous experience of working with disengaged and hard to reach young people; especially boys who put up a front, who are told they have to man up. For boys, if they have this type of father figure that reinforces that, the ability to talk about how they’re feeling is just not something that feels like it’s aloud in the household. And seeing their inability to communicate and talk about their emotions, it was just so apparent and so important to find a way to explore the pressures society puts on them to have this kind of male dominant role.

When we created our triple bill Reflections, we had three incredible pieces of work that were centred around mental health. And from the feedback, the one that stuck in people’s memories and created a real sense of emotional response and connection was Father Figurine. Whether you were male or female there were elements in that piece that people really related to.

Isaac: I was writing a poem titled Father Figurine at the time. Something cathartic, that reflected my anxiety and depression, that could reflect my own relationship with my dad and its shortcomings. I remember Emma-Jane pretty soon after the first Reflections show talking about creating a triple bill of works. She wanted to explore the male ego and mental health in a father-son relationship and I just knew straight away Father Figurine would be it. From then it just grew. Inspired by hundreds of real-life stories; both from Emma-Jane and I’s professional and personal relationships to research from mental health charities like Mind (with a huge help from Oxfordshire Mind), Young Minds and Samaritans. 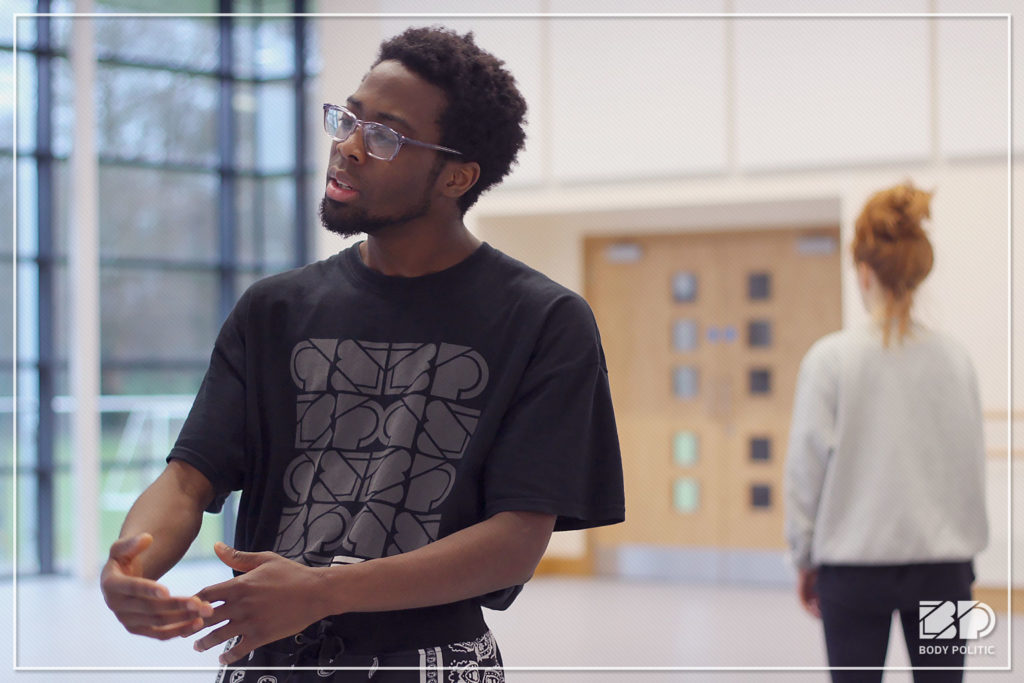 What impact would you want Father Figurine to have?

Emma-Jane: It’s about encouraging young people to have conversations around mental health, talk about their feelings, and know there is no shame in that. It’s also to bring new audiences into theatres. We are still in an age where the average theatre goer is white middle class. I mean I’m white middle class, but it’s important to me to break those barriers, expand them. And the outreach work we do is about making high-quality art accessible to everyone. There is so much to be gained from being involved in projects, participating in residencies, and going to see a piece of theatre. I think the fact that Isaac and Tyrone are black professional artists is also important for young people to see and be inspired to think “I can do that”. That’s also very exciting. I think the kind of impact that can have on somebody is huge.

Isaac: I want to empower. I want the work to empower everyone who comes across it. And especially empower men and boys. We’re in an age where ‘toxic masculinity’ is at the tip of our tongues. And rightly so, that negative should be talked about and questioned. But I also believe masculinity is being targeted without a consideration of its positives. I want Father Figurine to be a part of the conversation of men and boys talking about the negatives and challenging them; and most importantly embracing aspects of masculinity that can strengthen and heal us. It’s okay to be vulnerable. If anything, that’s the message I want this work to share. It’s okay for men and boys to be vulnerable.

Career highlights include working in the commercial and voluntary sectors
with leading organisations such as MGM, Sony, United Artists, Virgin and
more recently Hoxton Hall and Horizon Showcase. Added to this, she has
been privileged to support a number of freelance artists to devise strategic
marketing and communications plans as well as hands-on delivery of
campaigns for events and festivals including Amina Khayyam Dance
Company, Shoot Festival and BE FESTIVAL.

She’s mentored a number of early career arts marketing professionals and
has been a board member of the Arts Marketing Association, Bristol Old Vic
and Vice Chair of ACE Dance &amp; Music.

Joe Lott is a freelance producer and arts marketing specialist, who also creates her own digital choreographic projects.
She has worked with University of Sussex, Lila Dance, Flexer and Sandliand, Oxford Dance Forum, Sussex Dance Network, and Phil Chan of Final Bow for Yellow Face to name a few.  She is passionate about the power of dance participation and performance to bring joy, meaning, and cultural connection to communities.
She is delighted to work as Assistant Producer at this exciting time in Body Politic’s organisational development, celebrating 10 years, and touring in Spring!
Joe holds a First Class honours degree in Italian and Film studies, and a certificate in contemporary dance studies from London Contemporary Dance school.

Kyla has been dancing with Body Politic for 3 years but has done ballet since she was 2.
She really enjoys being a young leader, as it gives her many opportunities to teach in classes and gain more confidence. She also enjoys getting to meet lots of great people!
Outside of dance she enjoys working at the Parasol Project, an inclusive charity for children and young people in Oxford.

Kiyana, 15, has been dancing for BP for 3 years now. One thing she has particularly enjoyed doing for the company is being a young leader. Kiyana enjoys going to the classes and seeing other young people learning to dance. It motivates her, to see smiles on the young people’s faces. Outside of dance I also play football for a team and enjoy learning new styles of hip hop dance.

Kyron Jake Anthony is a professional dancer based in London. He has been training in Hip Hop since the age of 7, frequently battling, competing and winning European titles with the International Dance Organisation (IDO).

Since graduating from the University of East London (UEL), he has performed Anne Marie on the Greatest Dancer, internationally in Athens Greece Nostos festival and been a part of Sky Arts film Project Rebel, a Boy Blue Hip Hop theatre production.

Kyron is a passionate about sharing his love for Hip Hop Theatre with others and is excited about becoming one of Body Politic’s teachers.

His training is rooted in Hip Hop dance, Popping and House, but his curiosity has led him to other disciplines like Contemporary, Contemporary West African styles, and the written forms of poetry and scriptwriting. As well as dance theatre, he is fascinated by visual arts and filmmaking, and his work has grown to communicate through these multidisciplines.

Tyrone Isaac-Stuart is a soloist and collaborator currently blending his skills into a series of innovative stories. He studied Jazz saxophone at Middlesex University and the University of New Orleans and developed as a dancer whilst performing for East London’s Finest; Boy Blue Entertainment.

Tyrone’s style is rooted in musical, physical & spiritual practice. He is currently completing his debut album and gallery space work.

Natalie Wong is a graduating artist and dance teacher.

Natalie trained at the University of East London studying Urban Dance Practice graduating in class of 2020. Alongside this Natalie has taught for Body Politic Dance, Momentum Dance Academy and was an enabler for the Parasol Project Dance. Natalie has worked with different ages and abilities.

She started dancing contemporary at the age of four and then at a later age she discovered breakin’. Natalie has now trained in many styles of dance through clubs, groups, crews, college and university. From Natalie’s education at UEL she has learnt from many different successful artists in the dance industry. Her favourite styles are breakin’, contemporary and hip hop.

Natalie has a real passion for dance as it has had such a positive impact on her life and having the opportunity to teach has been incredibly rewarding.

To be able to express is a gift and to have the privilege to do that through dance is massive.
She loves to be able to see her students flourish and be part of helping them to be the best version of themselves.

As Artistic Director, Emma-Jane Greig works collaboratively with creatives to approach taboo socio-politic subject matter with an authentic flair for integrating narrative with Hip Hop movement. Emma-Jane and Body Politic as a result have been selected by Oxford Dance Forum (ODF) for their 3-year producer support programme, to receive in-kind support to galvanize national partnerships. Alongside, this Emma-Jane was also selected to become an associates artist at Swindon Dance (2020-2022), the only regional dance agency to house an Urban CAT scheme for aspiring young Hip Hop artists.

Emma-Jane has a huge amount of experience at facilitating and workshops to engage vulnerable and ‘at risk’ groups in the arts, and directing youth platforms. Her work as a freelance dance practitioner has included work in Pupil Referral Units, Mental Health Care in-patient wards, disabled groups, early intervention hubs as well as schools and FE colleges.

Emma-Jane’s passion is supporting others; helping others grow and providing a platform of opportunities that will enrich and impact the lives of others.

Emma-Jane is proud to be one of the only female choreographers in the UK touring Hip Hop dance theatre and is very excited about the scope this company has to transform the lives of others.

I first started dancing at the age of eighteen with my University’s dance team, Imperial College London. Since then, I have been active in the London dance community, training with various teachers, performing in shows, and creating my own pieces.

Throughout the four years I have been involved in Body Politic, I have choreographed for the Breezeblocks video and Reflections, performed at Pegasus Theatre in February 2016. Most recently, I performed at Body Politic’s 4 year anniversary show case, Profectus at Chisenhale Theatre. All of which were accomplished with my dance partner in crime, and best friend in life, Stephen Brown. In October 2016, Reflections was awarded Arts Council England funding. I look forward to further develop Reflections, creating two new works. I’m excited for my continued involvement this dynamic and exciting company.

I began dancing in 2010 when I started University. Since then, I have joined a number of teams within the London community, building my ability to dance, choreograph and teach internationally. Over this period, I have performed at well known venues such as Saddlers Wells, Wembley Arena and the Dominion Theatre.

My most notable achievements have been with Body Politic where I, alongside my closest friend Derek Mok, have choreographed for their previous theatre piece, Reflections in February 2016. Additionally we’ve created the Body Politic Dance video “Breezeblocks”, and have choreographed and performed for multiple events and showcases. Through love of the art form, I have danced alongside many of my inspirations within the community, whilst creating my own works that I am immensely proud of.